Makenna Murray: Hey Ross, welcome back! Where were you last week?

Ross Davison: I was out in Taiwan at the Lukang Longshan Temple with our sponsors from Iron Mountain and the BOCH or the Bureau of Cultural Heritage. They were both really great and sent out members of their teams to help out on site. China University of Technology was a big partner as well, they really facilitated our access through the BOCH and prompted them to put forward four sites, so we came back from the trip with an additional five sites for the archive—four donated and the temple that we documented. It’s really cool stuff. The Bureau had a lot of questions and we were able to help them figure out their metadata issues.

M: So their interests really lie in future use?

R: Yes. Future-proofing your data, which, of course, we at CyArk and even more so our partners at Iron Mountain are extremely well-versed in. So it was a good exchange of ideas.

M: So how did this project come to fruition?

R: Well Alex Yen, from the China University of Technology is a member of the International Committee for Documentation of Cultural Heritage (CIPA), so he is one of the people who will be tasked with looking at damaged sites and doing mitigation. He and Gustavo [Aroaz, the President of the International Council on Monuments and Sites (ICOMOS) and well as the CyArk 500 Council] looked at the sites in Taiwan and selected the Lukang Longshan Temple because first, it is one of the oldest, second, it’s the largest and third, it is the most culturally significant within the region. And, of course, its at great risk from earthquakes as well. The area is actually called the Ring of Fire for all of the volcanoes and hotspots that crop up there. While I was in Lukang, we actually experienced a bit of an earthquake. Coming from California, I’m pretty familiar with the sensation, but it’s always a little unnerving.

M: Wow! That’s exciting! It’s wonderful to see some many organizations coming together to make a project happen. What was your favorite part of documenting the site?

R: It was probably working with the material conservators on site. It was really cool to see them in action. They were doing a lot of restoration of the paneling. So while we were scanning I went over and checked out some of their techniques and they would come over and look at ours. A lot of what they do is physically removing these historic panels—all painted by hand, they’re about 250 years old—and they go through with cotton swabs and they remove all that built up pollution. It’s just this horrible black soot that piles up on the paint and has to be removed ASAP.

I scanned a couple of the panels they were cleaning and we did before and afters, which was fun for everyone to see in the field. It was a cool little interchange. Even though we couldn’t speak the same language, we were able to communicate with each other really well because of our shared understanding of documentation.

M: What were some of the other challenges you faced in the field besides communication barriers?

R: Huge amounts of tourism. There aren’t guards here, its and active temple and tourists just kind of go where they please. When you get a chance to look at some of the stuff we are producing, the panoramic photos are super awesome but that’s because we got there early before the temple opened, but the scans that we took after that are full of tourists! You will see people rubbing their hands against some of the painted panels or running their finger along the detailed wood work and of course, that introduces these new oils, and degrades the paint and can chip away actual wood from the panels.

M: Did the structure itself present and challenges?

R: Definitely. The temple is all wood joint. Asian structures are complex in a very different way than we will see in the west or near east. So where you might find a complex site in the Middle East that has dozens of arches and elements that build out from one another, they don’t tend to cover other features. But at the Longshan temple, the roof structures are the most interesting features because they are these interlacing brackets and the number of scans you have to take to get full coverage is insane. I think for one of the features we ended up taking about 60 scans.

M: Oh wow! That is much more than I expected. So you picked your technology accordingly?

R: Yeah, we did a combination of terrestrial LiDAR, Structured Light Scanning, aerial and terrestrial photogrammetry and panoramic photography.

We use FARO for a lot of our projects because it is so portable and easy to move around a site quickly. It captures the structural features really well—within 2-5 millimeters of accuracy. It is defintley the workhorse of our field process. A FARO distributor came out on site for this project which is somewhat unusual. They were really great. They really hustled on site and were good sports about everything. They would get up early with me to beat the tourists and stay out with us to work late. The whole project was then registered in FARO Scene.

We also took the Artec Eva, a structured light scanner which uses gridded light rather than a laser to capture incredibly high detail and color at the same time. We use this on the detailed wood reliefs throughout the temple and other objects that are too fine to be captured by a machine taking a single point every 2-5 millimeters.

For the panoramic photos, we used a one shot pano rig from NCTech. We can use those panos to texture data or to create Virtual Tours.

Last but not least, we were grateful to have a team fly a DJI drone over the site which we use for aerial photogrammetry, which provides context for the rest of the data.

CyArk also takers a few cameras with us on every project. We always take a Canon 5D because ultra-high resolution which we use to capture site photography and other photos for photogrammetry. We also take a Canon Rebel or EOS m which is a great basic camera you can hand to anyone

M: What will people be able to see virtually through cyark.org that they won’t see in person?

R: Well as a tourist, it is very frowned upon to enter some of the more religiously significant portions of the site, but the site managers were happy to open them up to us and our equipment to document and share virtually. But viewers will also be able to get up close with those complex architecture elements I was talking about that you would have to get up on a ladder to see in person, which, obviously, is not going to happen as a tourist.  So where you would be looking at these things from 20 or 30 feet away, with CyArk’s models, you will be able to see them from just a couple inches away.

M: Theoretically, could this be used for virtual reality in the future? Could people be virtually transported to the temple to experience a ceremony or just explore it on their own?

M: What’s next for this site?

R: Here at CyArk we will be doing the usual full web release for the project, including a 3D model, virtual tour, animations, information about the site, etc.

M: Anything else you want to share about your time out there?

R: I just want to share some special thanks. First Alex from China University of Technology, he was just amazing partner and driver of the project. Also Peter from Iron Mountain, he was so excited to come out and get to take part first hand. He actually did a fair bit of scanning with the Artec. Peter was really excited about the idea of getting a repository going in Taipei where Iron Mountain has a facility, so we are actually leaving a bunch of data there to seed that archive as well. And last but not least, all the amazing guys from FARO. They really hustled on site and were good sports about everything. They would get up early with me to beat the tourists and stay out with us to work late. So, all and all, a really great team!

M: Great! Well thanks for sharing your experience. I almost feel like I was there with you.

R: Absolutely! And you’ll feel even closer to the site once that project goes live. 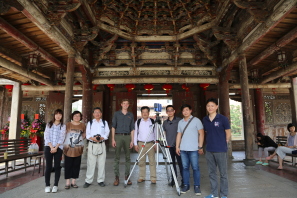 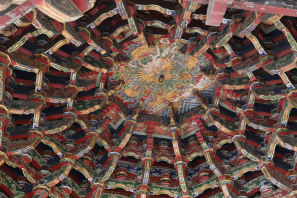 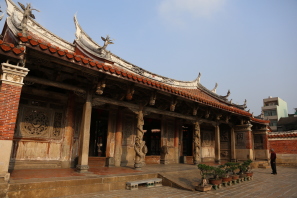