Following a 16 hour trip and a night in Skopje, the capital of Macedonia, the CyArk field team finally reached Ohrid, the location of our project site St. Sophia.

St Sophia, an 11th century church, is a complex layered archeological site. Initially constructed over a still discernible Roman temple. The church has had two principle additions to it’s footprint. Each addition composed of borrowed architectural elements from nearby historic sites that can still be distinguished in the building’s façade. For example, an out-of-place frieze, a travertine theater seat and a portion of a column can all be found along the western arcade of the church.  The church itself seems a reflection of Ohrid and it’s history, as it too boasts numerous archaeological sites spread out across the city.

Native Ohrid resident and architect Martin Simjanovski, accompanied the CyArk field team and provided insight on the history of St Sophia as well as on the city itself. Martin served as a translator for communications with local Ohrid residents, many of which he knew personally. This allowed us access to a few private balconies from which we could better document portions of St Sophia.

The field team worked concurrently to document and capture the exterior and interior portions of the church, utilizing both LiDAR to capture geometry and photogrammetry to later texture the 3D models. The focus of our documentation efforts at St Sophia were the extensive series of frescoes located throughout the church, with the intention of creating high resolution reflected ceiling plans. The produced plans will be invaluable in aiding upcoming restoration projects as a means of planning and tracking progress of the work.

Currently the CyArk team is in the process of refining the captured data to produce the final deliverables for St Sophia. Stay tuned for future updates on this project. 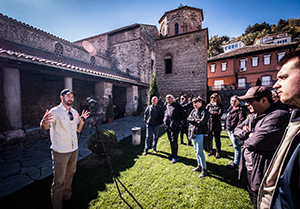 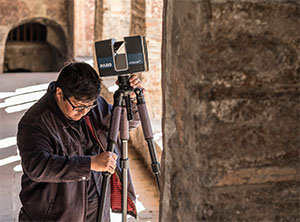