by Ross Davison
Back in the beginning of April, CyArk, in collaboration with the National Trust fully documented the historic site of Saint Michael's Mount—a tidal island in Mount’s Bay, Cornwall, UK. I greatly enjoyed being a part of the Team! With the great amount of detail on the iconic castle and chapel and large scale of the island, CyArk partnered with numerous private industry and academic partners. Leica and Aibotix provided aerial data capture support, while Heriot-Watt University aided with the terrestrial capture. Despite these challenges, with such a large team, we were able to capture an incredible amount of 3D data and on-site interviews during our week on the Mount.

St. Michaels Mount has proved militarily significant since the beginning of the Norman Conquest, through the Reformation and all the way through it's fortification during World War Two. In 1066, legend tells us, Edward the Confessor gave the island to its sister monastery in France of the same name (Mont Saint Michel), however the document was later discovered to be a forgery. In addition it also provided a strategic location in the defense against France and later Spain during the religious reforms of Henry VIII.

Because of the geometric and topographically complex nature of the Mount, CyArk employed innovative and experimental documentation techniques. For the terrestrial data collection, we partnered with Heriot-Watt University to supplement our standard data collection techniques with use of their extension arm rig. This allowed for data capture on areas otherwise inaccessible with traditional methods. To ensure full coverage of the entire island, including the roofs and surrounding features, CyArk partnered with Leica and Aibotix to capture the surrounding area with aerial UAV data.

All data collected will act as a baseline from which to measure future erosion of the Island’s shoreline as well as provide a basemap for renovations and conservation. However the most interesting results may come from the terrestrial survey in the underbrush surrounding the castle. Here we took the first step into looking at now forested areas for hidden archaeological elements. We hope the topographic map made from the data will point to unexcavated features for future study.

We owe thanks also to Leica and Aibotix for their UAV support, the members of Heriot-Watt University who supported us on-site with innovative scanning solutions, and the National Trust who provided financial support, access and donated academic resources to the history of the island. With the scan data now in our servers, CyArk and the National Trust are actively working to create content for conservation and analysis.

Please check back with us next month to see some of the data we captured on site! 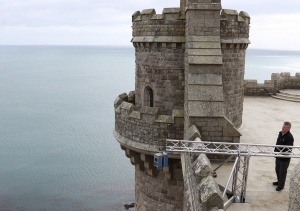 Doug Pritchard of Hariot-Watt University with his scanner rig 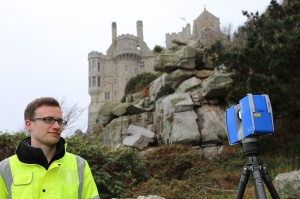 CyArk documenting the southeastern side of the island