by Ashley M. Richter
The idea of recycling is far more ancient than many would think. For millennia, people have reused everything; metal, clothing, and yes, even ancient monuments. Current trends in archaeological thought revel in the idea of an archaeological landscape: one which has been built up over millennia, interacting with culture after culture, each of whom has left their mark on a site or collection of sites. Often this is known as a palimpsest. A term which comes from the analysis of medieval manuscripts and originally indicated that a given piece of vellum or paper was used, scraped clear, and then re-used; leaving traces of its original text and images beneath the newer version. The city of Rome is a perfect example of an archaeological palimpsest. The ‘eternal city’, it was purportedly founded in the 8th century BCE and has maintained a constant population since its inception. A population which has altered the city over the millennia, leaving behind the rack and ruin of the previous ages in and amongst the modern trappings: making strange bedfellows of skyscrapers, medieval churches and Roman tombs.

The motives behind the reuse of ancient monuments varies considerably. In some cases, it may simply have been a matter of recycling building materials: after all, why start constructing a whole new building if you can use a pre-existing base ~ especially if no one has been using it for several hundred years? In other palimpsest cases, the reuse of a site appears to be a matter of symbolic importance; where an ancient site retains political or ceremonial prestige among the contemporary community and therefore anything associated with it attracts vestiges of the perceived importance of the earlier site. Stonehenge and its surrounding area, for instance, are a rather sacred palimpsest which went through multiple incarnations from prehistoric through medieval and which in the present has taken on a new role as a ceremonial site.

Other times, archaeological palimpsests may be a case of changed ideology, where new trends in thought manifest themselves among a population causing considerable culture change. The glorious city of Angkor in Cambodia is one such palimpsest site. A widespread complex of secular and religious buildings, Angkor was the largest pre-industrial city in the world. Today, however, most of what remains of Angkor is its monumental temples, most famously that of Angkor Wat. Built at the beginning of the 12th century AD as the personal mausoleum of King Suryavarman II, Angkor Wat was dedicated to the god Vishnu despite an earlier regional focus on the god Shiva. However, although it was originally built as a Hindu capital for the Khmer Empire, when the tenets of Buddhism gently permeated the region at the end of the 12th century, Angkor became a center of Buddhist worship. New monuments featured the Buddha and bodhisattvas, most notably the temple of Bayon, which was built by the Khmer ruler who embraced Buddhism King Jayavarman VII. Old monuments, such as the temple of Angkor Wat, were also subtly converted into Buddhist shrines, leaving the Hindu imagery in place. Banteay Kdei, a Buddhist monastic complex, may have once been a Hindu temple thus converted, but the absence of its inscription stone makes it impossible to say to whom it was originally dedicated. A brief resurgence of Hindu beliefs sanctioned by the next Khmer ruler Jayavarman VIII in the middle of the 13th century reinstated the Hindu focus of the earlier Khmer Empire and turned Angkor back into a Hindu center. Even Bayon was converted for this brief period, which involved the removal of the faces of many of the Buddhas featured in its architectural decorations. However, by the end of the 13th century, Buddhism had returned as the primary, but not exclusive, state religion of the region until the city of Angkor’s abandonment. It remains still, the largest religious monument worldwide and is visited by millions annually.

Archaeological palimpsests are exciting collections of evidence, built up through the ages, reflecting the changing styles and ideologies so indicative of humankind’s journey through time. As such intriguing representatives of culture, their intricate mixtures and accumulated details deserve to be studied in considerable depth and to be recorded for posterity, so that all may wonder at the changing landscapes of man. 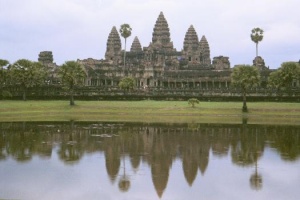 The Temple of Angkor Wat was built as a mauseoleum and dedicated to the god Vishnu. <a href="http://archive.cyark.org/angkor-wat-temple-complex-media">High Resolution Photo</a> 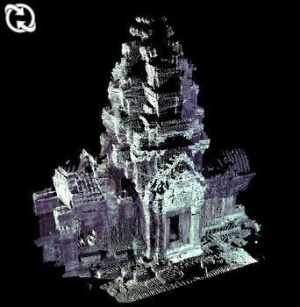 The gopura (entryway) of Banteay Kdei, possibly a Hindu temple, it was later a Buddhist monastic complex. <a href="http://archive.cyark.org/angkor-wat-temple-complex-media">Launch 3D Model</a>

One of the many stone faces at Bayon